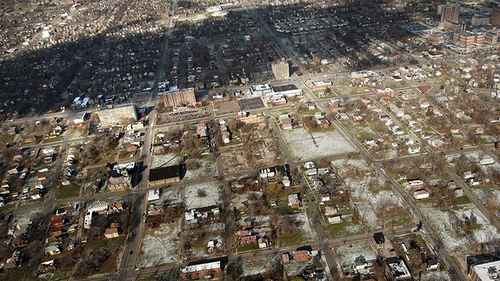 Detroit lost its tax base through the orchestrated de-industrialization and fraud described above, which pushed it into borrowing in order to maintain its services and infrastructure.  But the city didn't borrow all $19 billion it now owes.  The debt ballooned after a series of interest rate swaps, which locked Detroit into higher than necessary interest payments.  "[T]he banks carried out what amounted to predatory lending against the city itself," with the result that now, every month, besides paying firefighters’ salaries and whatnot, and servicing its debt, Detroit also has to just hand a bunch of money directly to the banks that manipulated them into the swap (and, lest we forget, manipulated the interest rates themselves).

As early as 1990, Michigan began passing legislation to hand governance of Detroit and other cities in financial crisis to an unelected "emergency manager."  This was done precisely on the understanding that democracy would have to be suspended in order to enact the kinds of measures that no population would agree to, such as suspending union contracts, reneging on pension commitments, and cutting necessary services.

That’s what Detroit's declaration of bankruptcy is about.  It is a way to circumvent the democratic process as well as all legal challenges to what is about to go down.  The city is indeed now in the hands of an emergency manager, Kevyn Orr, who is mustering all the rhetoric of economic necessity to go after pensions and city services, as well as the city's art collection—but not, of course, the banks or investors who own the city's debt (which he is mandated to pay back in full).  Orr's role is to accomplish one last vampiric push on behalf of capital, including such schemes as selling off the city’s assets, and privatizating its water and emergency services.  And in case there was any doubt that this has nothing to do with fiscal responsibility, the state recently announced a half billion dollar subsidy to build the Red Wings a new arena.

Look at Detroit, and you see the truth behind the utter fantasies we constantly recycle.  Corporations don't create jobs, they kill them in their search for wider margins.  Banks don't facilitate homeownership, they speculate against it.  And government doesn't represent the will of the people, it overrides that will on behalf of narrow, private interests.  This is how capitalism and class warfare work, always.  It's just a little more obvious in the Motor City.