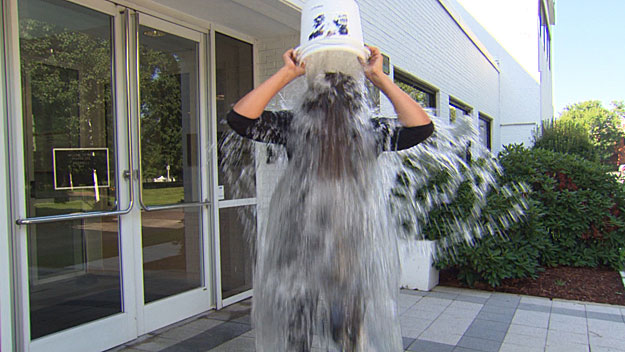 As with anything that gathers steam on social media in this day and age, the ice bucket challenge to raise funding for ALS research has enjoyed both a dewy honeymoon period of exploding popularity and glowing praise, with even high-level celebrities and politicians getting into the act, followed by a phase of caustic internet criticism and brusque dismissal.

One of the main lines of criticism is that the ice bucket challenge wastes water.  There's even a meme about it.

Okay, this is dumb.  The amount of water the campaign uses is insignificant, and certainly has no impact on water shortages in Africa, or even the drought in California.

"But!" you might say, "The people raising this objection are just trying to bring attention to the looming water crisis, and that's totally legitimate."

Well, if we want to talk about that, maybe we should talk less about this charity challenge or even about turning the tap off when you brush your teeth and more about how Dasani and Aquafina source their bottled water from some of the most drought-affected areas in California, which is symptomatic of the ways in which water resources are increasingly treated as a commodity rather than a public good.

Basically, this watery criticism of the ALS ice bucket challenge makes the mistake of thinking the cause of our problems is the behaviour of individual people, which we can endlessly moralize and criticize and get sanctimonious about, rather than the ways in which we institutionally mobilize resources as a society.

The funny thing is, the ALS ice bucket challenge itself makes the same mistake.  You don't solve medical or political or any kind of large-scale, societal problems through individual heroics (even multiplied times 1,000).  You solve them with a societal, institutional effort.  The most damning indictment of the ice bucket challenge comes in the form of the more than a dozen members of Congress who have publicly participated in the campaign, when three years ago they voted to slash funding for ALS research by supporting budget cuts.

"But!" you say, "The ice bucket challenge has already raised more money than was allocated in that federal budget!"  Sorry, but that's dumb too, because in five minutes we'll all be internet-fatigued from this campaign, and donations will plummet again, and it's less than likely that the ALS Association will have found another gimmick sufficient to keep that level of research funding going (not to mention the problems with leaving research funding in the hands of private entities in the first place, who spend half the money they raise on their own salaries).

Instead, we actually need to have a long-term, boring conversation (sorry) about what our collective priorities are, and then mobilize the political pressure to align spending accordingly.  By the way, the US spends $100 billion a year on corporate welfare and $640 billion a year on military expenditure.  Let's direct our outrage at that.  It's where the money is.