Thus racial coding has not so much disappeared in recent years, but rather simply migrated into the realm of dress rehersal, the realm of ideal, the realm of pure simulation, and as simulation it remains absolutely necessary...[it] must always pass into fantasy before it can ever return to the real. - Alexander Galloway

Lorde’s “Royals” has spent 4 straight weeks at No. 1 on the Billboard Hot 100 charts – whatever the fuck that means – and claims the longest stretch at No. 1 by a female artist this year, though she’s going to have to fend off Katy Perry who just released her unfortunately titled album Prism this week. Lorde is 16-year-old singer/songwriter from New Zealand in the indie-pop vein.

Lorde addresses “Royals,” ostensibly, at the regular people – “And we’ll never be royals / it don’t run in our blood.” The new aristocracy is not much different than that of old – money is still passed down generationally (though some of it is “new”) and power follows. Circles of wealth of and influence are just as tight (and stay that way) as ever. One look at a hedge fund/government/big firm/whatever will spit out, most likely, a small number of Ivy League schools where lineage is the rule of the day. This is not the life for most.

The song is pretty short, so the music video does a better job of framing the suburban setting and focus on mundane routine contrast most starkly with the chorus – ironically or earnestly, you decide, though maybe it doesn’t matter much – so it transforms the song into a more thoughtful look on domestic, residential adolescent malaise and boredom. You probably didn’t grow up in a small town if you've never boxed your friends in their parents' basement, or knew people who did.

Bemoaning celebrity culture with a television tuned not to Access Hollywood or some show with unnecessary punctuation but to the unwanted static margins, “Royals” wants to push back against mass cultural deliverables. It does that in the form of mass cultural deliverables: pop music! Being from New Zealand, Lorde has an experience of the American cultural production that we as Americans cannot have. We participate with it and are embedded in it. She receives it as an import.

The song is at its best when, in between its chorus, Lorde talks about wealth and privilege – “I’ve never seen a diamond in the flesh / I’m not proud of my address / That kind of luxe just ain’t for us / We didn’t come from money.” When what is excessively communicated are particular markers of extreme wealth, how do those without them navigate that sphere? What about people that resist an imposed desire for them? Those interesting pieces, though, get murky when we ask ourselves who she is addressing. Whose love affair is she not caught up in?

Rap is dominant culture right now, so even if her markers of decadence and conspicuous consumption weren’t specifically and (almost) exclusively embedded in the dialect of rap culture, the feeling still would be hard to shake that we know who she’s talking about. The fact remains, however, that gold teeth, Cristal, Maybachs, and “diamonds on [a] timepiece” are signifiers of hip-hop and, by extension, of a highly visible and prominent segment of (mostly) black culture.

Verónica Bayetti Flores from feministing.com wrote a post calling “Royals” racist. CNN recapped the minor controversy – anything for a post. Dave Schilling, in a column for Vice apparently on racism, is having none of that talk, asking contentedly: “Why would anyone assign their own cultural baggage to someone who isn't even old enough to buy cigarettes in America? Also, are "Jet planes, islands, [and] tigers on a gold leash" or "Blood stains, ball gowns, [and] trashin’ the hotel room" black things?” Well, of course they aren’t, what a ridiculous suggestion! Ah ha! It would appear Flores overplayed her hand!

Ideology rears its head as common sense. It speaks soothingly, calms tensions. “Royals” doesn’t have to be totally racist or not at all; they are not mutually exclusive. If the inevitable response to critique is “Well, have you even looked at [this other thing]? What about [this part]?” then we might be in some trouble. All or nothing, right or wrong, before or after, racist or not, lends itself to an ideology of absolute difference, one that prefers to speak out of both sides of its mouth.

The alternative is the (once) popular strain in (then) emergent postmodernist critical theory - what Michael Hart and Antonio Negri called anti-essentialist discourse, associated with the elevation of affective difference and hybrid, multiplied, and varied subjectivities. This is the "Don't put your cultural baggage on someone else - we are all different and unique with diverse perspectives. Embrace it, because we sure do!" That has been swallowed up whole and digested completely by the postfordist marketplace, now just another valorized demographical category. Think multi-culturalism or the injection of difference (via "play" and/or cat videos) into the workday - Apple says: Be Different. This doesn't render such identity politics moot, but screams for us to be aware that these politics, though ours originally, may serve something new now.

Issues of identity and race get lost and perverted in fragmented tributary political gestures, as reducing social struggles (and history writ large) to the level of the Deluzian dividual makes them more manageable, eventually creates the conditions for their corrupted assimilation into a new, but always so familiar, hegemonic structure. Management is the order of the day. Postfordist ideology says that difference should be preserved at all cost (for all costs). Post-racial ideology would say forget difference completely.  There is violence on both extremes, suggesting the need for a new path foward.

Lorde obviously sees her perspective as an outsider (read: non-American, but not necessarily non-Western) reacting to all of the shit that is shoved down her throat emanating mostly from the States as a valuable one. Many people both inside and outside the U.S. can relate to that. A critique of consumer culture is perfectly fine, but it can also be devoid of racialized particularities. Could it be as simple as saying champagne instead of Cristal? Why is the main defense just a recitation of straightforward facts – the song is a response to U.S. dominated popular culture by a non-American teenager – as if that single sentence contains within it all justification one would ever need? New Zealand is still nearly 70% white/European. 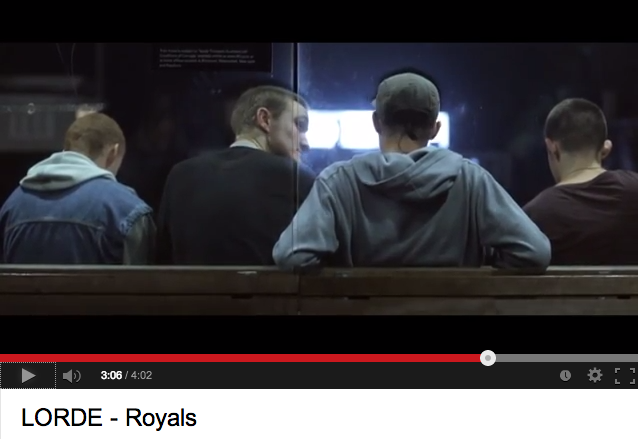 It’s a frustrating phenomenon that is occurring with more frequency, at least among white people: when someone suggests that something is racially problematic, and, for example, another well-educated emphatically not racist person doesn’t think the same thing, the implication is that the former is calling the latter a guilty-by-association racist. It seems insane that someone cannot point out a racially problematic portion of an otherwise straightforward pop song without being attacked. It is in these moments that we see the fantasy of “post-race” clung to most violently.

All this talk about “Royals” address to consumerism and the vapid materialist message of American pop culture exports is fine, but that doesn’t change the fact that rap music is front and center culturally and (if the U.S. is exporting its popular culture) its most salient product. "Royals" is a fine and catchy pop song and if you like it you still aren’t a racist. Most people like the song. It’s a good song. Relax. But to suggest that the song isn't talking about hip-hop whatsoever is wonky.

The problem remains, though, that half of those things that Lorde mentions are racially coded; they are metonymies for blackness. And not just for Americans, but for many in the Western world and for every place touched by contemporary American cultural exports. I won’t go so far as to say that Royals is a racist song, and I definitely won’t suggest that Lordes is racist by any means, but that is precisely the problem. In the post-racial world, even the racists aren't racist.