What do we eat? This question seems to be popping up everywhere, from debates about GMOs, to position papers about food scarcity, campaigns against global hunger, economic forecasts, and above all the dinner table. The response is a complicated one, and it increasingly seems to be a more complex one. The easy response is that politics matter, and not only your personal politics, but those of the people even presenting the question.

Journalists around the world are now trying to respond to the question in different ways, they all say, the answers are out there. But perhaps the most difficult thing for the reader is knowing who to trust? The NY Times recently released an article titled Food, Genes and the Feeling of Risk to introduce the conversation of GMOs in a new light. In the coverage, it is possible to read between lines, and see that politics matter. Those politics are not just in the usual left vs right continuum, but also how questions are asked, what information is included and what issues are highlighted. So informing oneself is no easy task and certainly to try to simplify a complex conversation will just serve to again play into such politics.

The questions journalists ask are normally framed in political neutral ways, unless you read really tendentious writers. However, the framing of the question readies us for the type of answers we will get. In the emerging sub discipline of visual politics, politics of the everyday and the anthropology of the senses are combined to offer answers to ways visuality frames our responses. Here, I would like to show how pictures matter in the debate. While also showing how the power of photography could be used to deploy a series of cues that target specific politics. 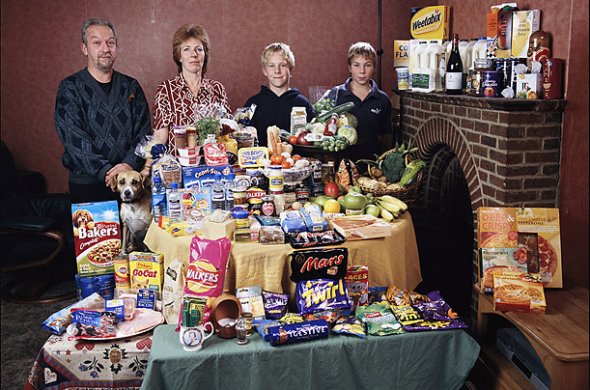 For a couple of years, a photo essay titled: Hungry Planet by Peter Menzel and Faith D’Aluisio has been circulating on social media. In this collection of pictures (which is only a partial collection from a much larger book on the subject), Menzel and D’Aluisio document the global pantry and attempts to question local consumption patterns.

The juxtaposition of the consumption patterns between families in different parts of the world aims to present ideas of wealth, nutrition, and eating habits as neutral for the viewer. However, without an explanation on the way families, and for that matter countries, were chosen or the amount of caloric intake per household, the comparison is ripe for stereotypical commentaries.

Therefore, what may be a more complete diet of fruits and vegetables with minimum animal protein can be read as a poor people's diet, framed by the picture of rural peasants. Or a typical western diet of processed foods, rich in sugars and fats and with plenty of animal proteins can be read as a wealthy diet, despite the health risks that such a diet may pose. When food items are presented along side a suburban African American family, the reading is open to racial readings and stereotypes about lifestyles.

Still, the images are powerful and end up achieving a sense of global consumption patterns that feels familiar. The sense of earth-citizens overtakes the viewer and gives opportunity to establish even for a moment a connection to other human eaters, who at the end of the day are also eating just like “us.”

The reason for this comforting feeling is that perhaps cooking is today the most human activity. So the simple act of photographing families and their food conveys a sense of unity between all of us who eat and cook.

Unfortunately, what the pictures do not show is the forms those foods are cooked, prepared, and finally consumed. While the pictures show unprocessed goods, the overall idea is not to show the channels food goes through to be cooked and consumed, or the role of multinationals in controlling seeds, or the way certain governments subsidize specific crops, or the movement to mono-varietal growing at industrial farms. Also no prices are shown, missing an opportunity to understand how expensive some diets have become and the pressure on farmers to maintain artificial low prices for the sake of preserving profits for industrial food conglomerates.

What the pictures do show is a very different interpretation of the family unit. Not all the pictures show a traditional nuclear family, and in many cases the extended family (grandmothers, uncles and others) are included in the portrait. However, I’m sure this was not the main objective of the photo-journalist and is certainly not the goal of people who use these images to convey their politics. 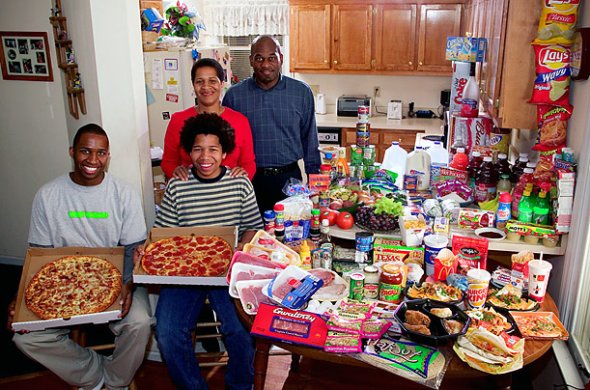 Beyond this photo essay, the question about what do we eat and the presentation of that question is a more complex conversation about the role of food in our societies. However, it is important to be aware that when these conversations are debated, the framing of them matters.

Thumbnail image and all images in this article are by Peter Menzel and Faith D’Aluisio found here.