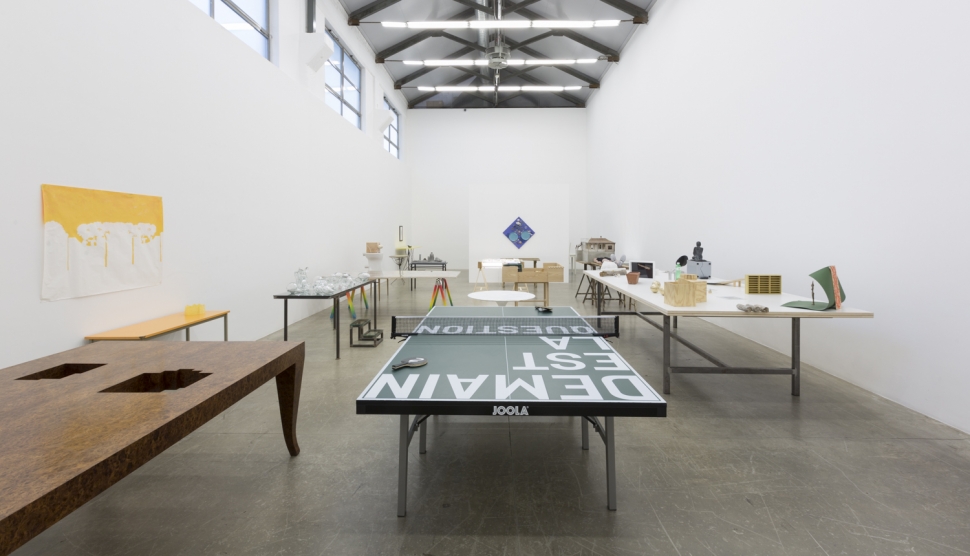 It’s January 2016. I’m at Massimo De Carlo’s, in Milan. THE PAGAD strokes me with a sense of completeness, perfection and solidity. Probably one of the most interesting show I have seen in my city so far, with brilliantly selected works from the gallery’s archive.

An expanse assemblage of artists’ tables drives the way of a brilliantly staged exhibition, thematically and conceptually centred within the field of constructions that fall outside their utilitarian nature.

The universe constructed by Rita Selvaggio – the curator – reflects on the essence of the art-object, exploring the detachment of the functional element from the most basic, traditional domestic structure: the table.

I am writing these lines having the image of that Rirkrit Tiravanija locked in my mind, a work connecting the act of dialoguing to a basic representation of a sort of conversational sport as table tennis may be, structured through a tit-for-tat schema.

In my mind it is so clear, so natural: the curator worked with omni-comprehensive intellect to produce a language of semi-objects, refusing the idea of easy, safe zone proper to most of gallery shows happening around the globe.

The gallery functioned as archive, as a collection, in its purest aim to present works from represented artists in an anthological way. And that led me to reconfigure my opinion toward curated interventions into commercial galleries.