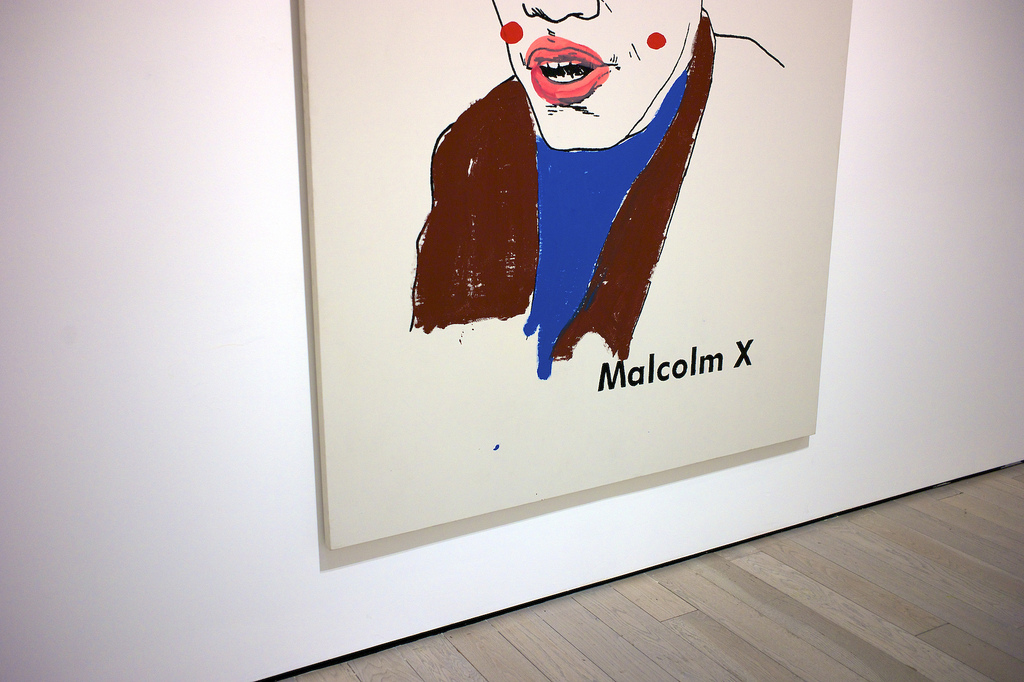 Do not misunderstand the use of the word ‘negro’ here. It is not to recall some commanding presence the word may have had in the past. Using it within those parameters would undoubtedly undermine any conclusions that may be drawn from the following piece. It is included only as a reiteration of African American identity as singular and unchanging. Coupling this context with the term, 'monolithic' is indeed redundant, and intentionally so. The effect of the title is to be hermeneutically referring back to the current state of the black body through a post-humanist filter; superfluous, singular and unmoving.

The way in which African Americans collectivize themselves today is, almost exclusively, seen through their use of rhetoric. The term black is an accepted rhetoric that has been used to describe African Americans even though it lacks as a descriptor of a persons skin color. Author Jorge Klor de Alva, in a joint interview with philosopher Cornel West for Harper Magazine, made a profound statement on the use of the word black when asked if he’d refer to West as a black man. “Cornel is only black within a certain reductionist context. And that context, where color is made to represent not so much the hue of one's skin as a set of denigrated experiences--and where these experiences are applied to everyone who ever had an African ancestor--is one I consider to be extremely negative.” The word holds in it many painful experiences as de Alva alludes to. Certainly, the word should be seen as a misnomer as its context is no longer applicable yet it’s still a preferred term when referring to those of African descent.

Later in the same interview, de Alva makes a comparison between the use of black to describe African Americans and the introduction of the term Indian by European settlers to describe Native Americans:

Before millions died from newly introduced diseases, the Europeans called them naturales, or "natural people." Afterwards the survivors came to be called "Indians," a term the natives did not use until the nineteenth century, preferring to identify themselves by their tribal group….When that ended, they were all seen as despised Indians. The general label only helped to promote their denigration.

While the term black as it is used now mostly lacks the maliciousness that came along with Native Americans being called Indians, the general idea holds steady. Ignorance of the etymology of the term is likely the culprit for its continued usage; a forgivable transgression for those who don’t fit within the term. Unfortunately, the main users of the word are typically players within the construction of what I am calling the ‘Monolithic Negro’.

One critical example of this construction reveals itself in the rise of ‘Black Twitter’. The word black conjoined with Twitter leads to an understanding that equates to a segregated section of twitter populated only with blacks, or at least black culture. To say the user need not be black to participate or that black twitter doesn’t encompass all blacks (as this piece suggests) would certainly make the wording of the phrase inappropriate. For the sake of this piece, though, the topic at hand is perception and Black Twitter as a phrase definitely speaks to the perceived notion that it is the representation of black people on social media: what they care about, how they behave and what opinions they hold.

‘Black Twitter’, as a particular digitally mediated communication space, prominence can largely be traced to Twitters use during and after the Trayvon Martin Case. Outspoken social media users made their opinions known with hash-tags like #wearealltrayvon. Users of these hash-tags, consciously and unconsciously, distinguished themselves with justifications that Trayvon could have been ‘on of them’ or ‘their children’. Nevertheless hasty conclusions like this can be a slippery slope. The aforementioned event is likely more of a circumstance of attire combined with the “thuggish” stereotype than a matter of simple racism. Thus, we are not all Trayvon. All that is seen through the construction of the ‘Monolithic Negro’, though, is a crime against itself.

Either directly or indirectly, many blacks who are considered intellectuals disregard the idea of ‘their people’ being a monolith. Cultural critic Toure’s book “Who´s Afraid of Post Blackness? What it Means to be Black Now”  comes to mind as such a claim. One only need look at the title to see that the author has dubiously collectivized African Americans in order to try and make a distinction. By claiming to hold within his book the nature of what it means to be a part of this fabricated but ultimately fictitious group he is further etching a line in the proverbial sand.

The want to not simply be categorized into a uniform structure is a natural byproduct of an American culture that places an uninterrupted form of individualism in the forefront through its interaction with consumerism and social media. This denial of a collectivist trait more than likely stems from fear of being grouped in with those of the impoverished mindset, i.e., African Americans that are usually associated with incarceration and a lack of education. Whether consciously or not, they don't believe accomplishments will be credited on their own merits but judged by the physical characteristics they share with people. This is not to say that their concerns are entirely unfounded; even in a society often labeled ‘post-racial’, “affirmative action” is still a stated insult.

In a historical perspective, minorities have used the construction of monolithic identities as a strategy to rectify injustices imposed upon them by the majority. This process of ‘othering’ was often used, by those involved in the African American Civil Rights Movement, from the 1890’s to the late sixties. The ‘Monolithic Negro’ was a tactic used to give those involved a sense of community. By collectivizing all African Americans into one invariable mass, all effort was centered on the issue at hand; civil rights for their people. It was unquestionably advantageous as all citizens of the United States share the same rights; in terms of race at least.

The accusation that serves as the basis for this critique is that the modern African American has shepherded the same structure into the whole of black culture since. The movement has been romanticized to the point of not being seen as it was, (a crusade in which those involved gave up any attempt at some sort of individual, intellectual advancement) but as a model for how to deal with any disagreements, no matter how meager, in which they are the minority. Admittedly, this assumes that the plight blacks face today is not as intensely serious as that of those before them. It’s doubtful, though, that anyone would contest this knowing the privileges African Americans rightly hold now in comparison with what was held by African descendants living in the United States of America previously.

A troubling pathology arises when the party responsible for an injustice is given the face of an outsider. Instead of properly labeling the issue as societal perceptions, the instigator of many ailments for African Americans has to be labeled as their diametric opposite. The established enemy in this sense is, of course, the majority (specifically whites). The prevailing perception is that the ‘majority’ is holding back minorities from true equality. Within this frame of thought lies the beginnings of the ‘Monolithic Negro’ as an entity. The more an individual senses separation from the whole, the more incentive there is to form a coalition with others that share this supposed plight.

Any reader will undoubtedly be concerned that those who wish to dispose of their indivisible state still choose to take every opportunity to point to their ‘self’ in its othered state (Of course this isn't true in the case of every person but the exception will never dictate the rule).

The idea of a publication, television station or any other form of media that singularly gives a black perspective may have once been pertinent considering African Americans at one time were denied jobs in these fields because of their race. That is no longer the case, therefore, it should be the desire for every forward thinking African American that these tools of the monolith be deemed obsolete. Their continued existence along with all most, if not all, usage of the term black as a vehicle for separation hinder the advancement toward any true realization of individuality for African Americans.

One would think that the death of the 'Monolithic Negro' is an eventuality, but I fear the base in which we are entrenched may prove to be an infinitely stagnating state.