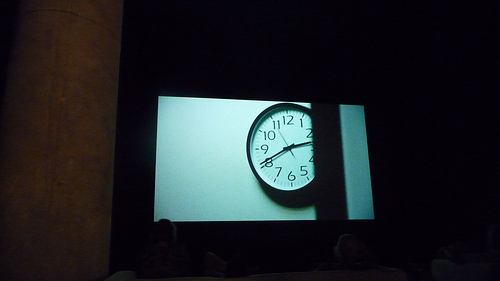 The real “subject” of the film is life and death itself, not life and death in the abstract, or the life and death of the actors on the screen, but our own being, our own time. Despite this heavy matter, Marclay manages to conjure levity, humor, and playfulness—otherwise the film would be unbearable. Something haunting becomes hilarious through juxtaposition: in the final scene of Seven, the sadistic murderer (Kevin Spacey) asks the detective (Morgan Freeman) what time it is, to which he replies, “7:01,” the scheduled time of delivery of a package containing the severed head of the wife of the other detective (Brad Pitt). The audience bursts into laughter at this grisly moment because just before a scene from Bruce Almighty has Jim Carrey asking God (also played by Morgan Freeman) what time it is to which God answers, “7:00.” The simple fact that the same actor tells the time at each minute creates continuity between two discontinuous moments and places, thus making explicit the thin line between comedy and tragedy, laughter and tears, life and death. We laugh all the harder because it is a necessary cathartic release of the anxiety and tension that has been built as we voluntarily watch time’s trudge, reminded at every moment that a minute has passed, that we are one second closer to our death. Yet somehow, we cannot look away from "The Clock." For the first time, we truly watch the watch as it ticks, tocks, ticks…but what is it that we watch?