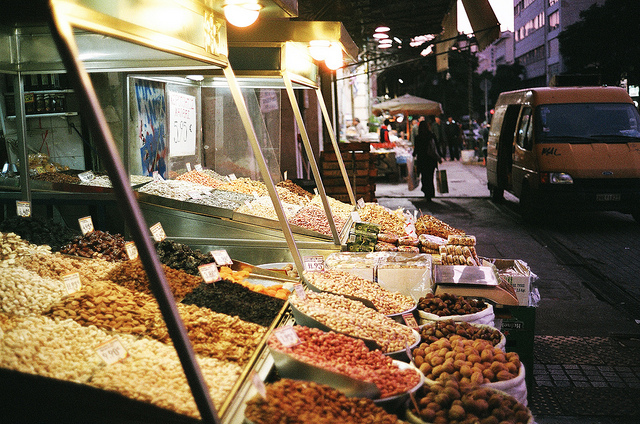 As a first-generation Australian immigrant, I have always been curious about people’s homes. While school explicitly presented and enforced hegemonic models of studenthood that were easy to follow, I always attributed my feelings of alienation and difference to that mysterious and private sphere of the home.

Imagine my fascination, then, when as an adult I discovered the world of food blogs where performances of hegemonic femininity and domesticity are narrated as clearly as the instructional recipes that are clearly of secondary importance to the logic of these texts. Woman after woman draws us in with light-flooded photos of her kitchen; intimate confessions of motherhood; the mundane details of family life. These are reproductions of traditional domesticity more faithful than any mainstream media text could hope to get away with while, simultaneously, their individually-authored, bottom-up production methods present a new challenge for feminist media scholars.

The predominantly female lifestyle blogosphere has flourished in the last decade, capitalising on the current fetish for technologically-mediated authenticity and intimacy. In the same way that medical technologies have long penetrated women’s bodies, digital technologies take us into women’s homes and emotional lives, accompanied by the new regimes of self-discipline and regulation that such visibility inevitably evokes.

This discipline is evident when considering the additional labour that takes place in performing digital femininity. Not only are food bloggers performing the work of pre-feminist domesticity – cheerfully churning out endless pies and cakes in their kitchens – but they are employing extensive amounts of creative and digital labour in order to disguise the tedium of this domesticity. They are tasked with nurturing not only their families but their invisible virtual audience: a professional domesticity that is pleasurable for many, and lucrative for few.

As we are all prosumers in the digital age, I also view the blog lurker’s participatory construction of this online femininity as labour, despite our reluctance to see it as such. However, I also credit most blog readers with a healthy sense of ambivalence that has come about from the past decade of social media literacy that allows us to reliably infer that the perfectly cultivated newsfeed we see may be real, but it is not in and of itself reality. I think this healthy skepticism of the life told through images and social media is reflected in the accompanying rise of hate bloggers, irreverent parenting confessions, and humorous Pinterest fails. And then the notion that as soon as these online conventions solidify into something approximating a genre, they too may be debunked, in the never-ending act of unpeeling digital layers of simulation.

It is this moment when the pleasurable becomes uncanny that is fascinating, an experience typically discovered when the social media that compulsively attract us unexpectedly repel us with a negative affective response. While one of the great political strengths of food blogs is their construction of a gift economy, sometimes these gifts feel like they are of the ‘I got you a gym membership for your birthday, honey’ variety. This perpetual ambivalence captures the precarity of feminine labour in the digital age: recuperating the traditional role of homemaker, bloggers diligently and creatively nourish a starved audience, making a home among the digital ruins of intimacy and authenticity.