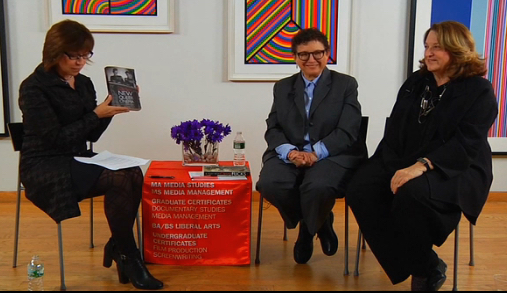 I love you, as an idea, as a manifesto, as an aspiration to reinvent education, as laughing, crying, hugging bodies when we meet face-to-face, as kick-ass co-written essays and curricula, as conversations on digital platforms across the globe, as messy fun and, sadly, as dropped balls, angry moments, and missed opportunities, too. I suppose because I love you, I want to hold onto you in some durable form like an archive.

FemTechNet is a collective of feminists of all genders, committed to critical science and technology studies. Since I got involved with the FemTechNet collective in 2013, I have marveled at our far-flung connections generating Distributed Open Collaborative Courses (DOCCs): graduate and undergraduate courses at some 30 institutions and seven or so community sites. Together we have made videos, maps, audio materials and games, along with numerous presentations on our campuses, at conferences, and soon, at our very own conference, the Distributed Open Collaborative Conference, in April 2016 at the University of Michigan. We enthusiastically created 14 committees with huge agendas (which we have since pared down!) and organized three summer workshops, first, in Los Angeles and New York City, then, in Los Angeles, Ann Arbor, and New York City and, in 2015, in Los Angeles and New Haven; the latter had online attendees from India, Italy, Canada, and Lithuania.

Anne Balsamo and Alex Juhasz launched us into existence in 2012 and wrote up their framing ideas in Ada: Journal of Gender, New Media and Technology. They pushed and pulled people from their networks into the first year and a half of classes, always inspiring and generously sharing. We wrote grants, we got some funding, we worked harder and wrote more grants. We remain ever-so-grateful for the institutional support of the University of Michigan’s Institute for Research on Women and Gender (IRWG), along with substantial support from The New School, Yale University, and most of the campuses where DOCCs have been taught.

The question gripping me of late is: what do we do with all the amazing digital stuff we have created? How to make it readily accessible, yet durable into the future; mashable, yet linked to its original version; safe, yet reflective of the risks and ephemeral nature of many of our exchanges? What should be forgotten and what should be preserved? In the process of preserving our archive, how do we go about simultaneously “ripping apart and rebuilding the machinery of the archive and database so that it doesn’t reproduce the logic that got us here in the first place,” as Miriam Posner specified? I don’t have any immediate answers, so instead I want to point to a few places that we as a collective might look for ideas.

Some contributors to FemTechNet have a right to be forgotten. We acknowledge that when certain people or groups share experiences, this exposure can be unsafe for them, as María Lugones stressed: “Disclosing our secrets threatens our survival.” Thinking that sharing their experiences might be saved in some way could silence expression for some; far better to foster “e-Femerality,” the transitory, ephemeral connections that allow for feminist connections that then evaporate. As FemTechNet quoted Grace Hong in a recent collective statement: “[F]or women of color feminist practice, visibility is a rupture, an impossible articulation….[V]isibility is not inclusion, but surveillance.” Rodney Carter noted that in addition to avoiding surveillance, “By remaining outside the archive, the narratives must remain alive.”

Of course, no archive is comprehensive. There are feminists (among others) who disagree with FemTechNet; others choose to tackle structures of power differently. These groups and individuals—whether by choice or necessity--have a right to be silent, as Carter also noted. While we must remain aware that we are preserving only a “sliver of a sliver of a sliver” of the documentary universe according to Verne Harris, can we aim for a sliver that reflects light(s) from and about other efforts, at the same time that we recognize the voids and silences? “In the archive there is what might be called an absent-presence. What is present in the archives is defined by what is not. And the archival silences are delimited by the archival voices.” How might archival silences be represented digitally, I wonder?

So what of this sliver that I think demands some kind of permanent place in the “documentary universe”? What might the right to be remembered look like? Maria Cotera wrote that her goal for the Chicana por mi Raza digital archive was “to reimagine the archive not as a static repository but as an active site of knowledge production that could realize the emancipatory potential of its central subject, Chicana feminism.” Cotera’s archive project “called into question the very nature of the archive—how it is constituted, what it tells us, who it represents, and how it is engaged for knowledge production.” The static versus active descriptors name the challenges for FemTechNet, I think: control and security versus interaction and risk. Cotera featured Women who Rock, “a re-visioning of archival development as a ‘collaborative project driven and sustained by relationships,’ what they term ‘feminist archivista  praxis.’…[T]he archive is not a site but a relationship—a process of encuentro (encounter) that brings together a cross-generational cohort of students, faculty, and artistic and musical collectives through participatory research, community-based learning, and ‘unconferences’ (staged outside the university).” I love the idea of an encounter, of centering relationships in the archive, though I myself don’t have the skills to make that happen digitally.

Another model for FemTechNet that offers more control of the material might be “The Performing Archive” begun in 2006 by artist Suzanne Lacy and her long-time collaborator, Leslie Labowitz. This archive includes the documentation of their performance work from 1971 to 1984. Lacy and Labowitz created “The Performing Archive” as an ongoing installation, performance, and video project in which younger women were video-recorded responding to materials they selected from over 50 boxes of archives. So, likewise, FemTechNet could stage periodic engagements with the archive, either as a part of courses, or as one-off events. Lacy described their project: “Thus the work framed the acts of inquiry, mythologizing, and interpretation that represent the transmission of feminist art history, through the observations of young women born during the decade in which some of the major works on violence against women by Lacy and Labowitz were presented.”

Perspectives on Women’s Archives, edited by Tanya Zanish-Belcher with Anke Voss, is a volume chock-full of essays that provides historical perspectives to archival work. It is easy to forget in the midst of creating materials that we too will have a place in history; our stuff, our interactions, may be transformative, but only if they are somehow passed along. In that volume, Danelle Moon noted the complexity of ”feminist activism across time, [which] is messy and is not bound by chronological ideology.” Zanish-Belcher and Voss support activist archivists “to recognize that history is about all sexes, races and classes and that archives should reflect that.” Aligned with that commitment, a 2002 exhibition catalog quoted Bart De Baere: “So archive work is not a peripheral phenomenon, storage for data that have become as good as useless, for ballast that may possibly be reused. It is potentially a core task for society, or at least a core instrument and powerful image of it.”

In conversation with Anne Balsamo in 2013, B. Ruby Rich and Lynn Hershman Leeson created a FemTechNet Video Dialogue on the keyword, “Archive.” Hershman Leeson started off by saying, “in the 70s it suddenly dawned on me that many women had no history, because they weren’t in history. That I think was an impetus for thinking about the artifacts and the discards, the collection of what in painting is called the negative space, the space around something that forms it….” Then she reminded us listeners of Revolution Art Women, RAW/WAR, an “interactive, community-curated archive” about the history of women’s art. In the end, perhaps, our own FemTechNet archive—which contains the “Archive” dialogue--points out what to do with our materials. The RAW/WAR site articulates my hope for FemTechNet’s collection as well: “[W]e, as a global digital community, can now all participate in its creation and change the way history itself is constructed. Using new technologies, current and future generations can create their own histories, breaking the cycle of omission and erasure.” That’s a core task, for sure, likely messy and time-consuming, but, in relationship, and with love, probably within reach!